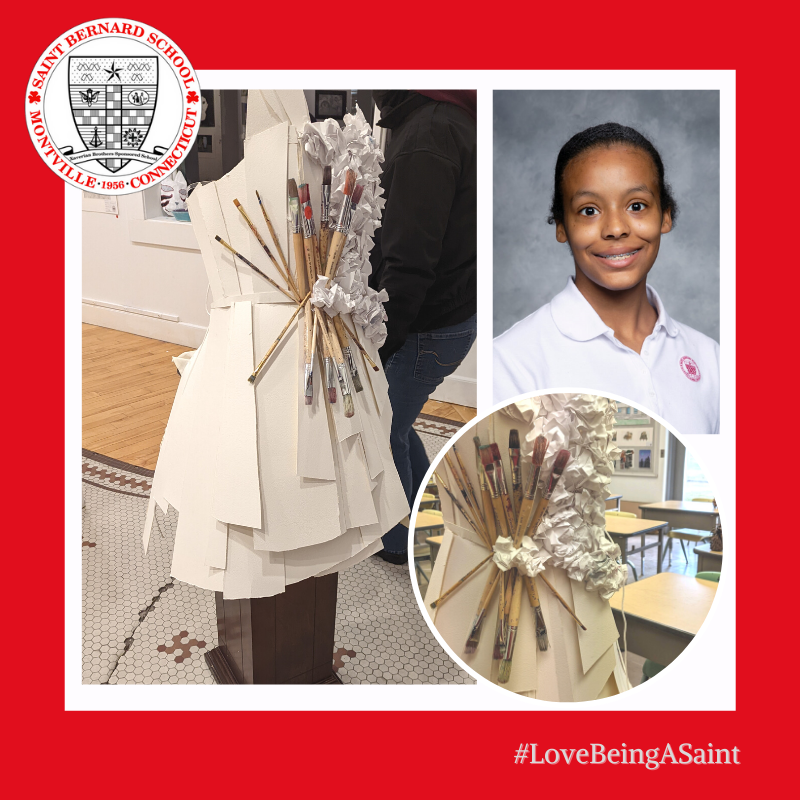 A Saint Bernard student who created a dress from scraps of materials she found in the art room turned trash into cash when her piece was purchased by two local artists.

“I looked at what I saw around the art department and wanted to make something out of materials that I found,” Quinn said. “It took about a week to put together on top of a month of slowly collecting materials.”

She used some cotton fabric as a base, pieces of cut matboard used for framing, paper from an old unfinished sketchbook, and dried paint brushes that would have otherwise been thrown out. And she repurposed the materials into a dress.

Quinn’s design was exhibited at the Hygienic Art gallery in New London during an art show featuring the works of students from SBS, and New London and Waterford high schools.

The show was attended by hundreds of guests – including Mark and Juner Patnode, a local couple who are professional artists, as well as teaching artists.

While viewing and admiring the students’ creations, one piece that caught their eyes was Quinn’s design.

“We are quite pleased with Quinn Lee’s matboard dress,” said Mark Patnode who asked to buy the piece, even though it was originally not for sale.

With Quinn’s blessing, the dress was sold to the Patnodes for $250 at the conclusion of the show in late January.

“I was shocked and really excited because I didn't think someone would want to buy it,” said Quinn. “This is the first time I've sold any piece of art, let alone a design.”

The dress is now on permanent display at the entrance to the Sapphire House which, until recently, was part of the Griffiths Art Center in New London.

"We have chosen the location due to the number of students Juner has coming (there) and the inspiration it provides," Mark Patnode said.

The entire experience has given Quinn a boost of confidence in her artistic ability, as well as an idea of a possible career path. “I think I'd like to go into a career of fashion designing,” she said.

Saint Bernard’s art program teaches the fundamentals necessary to anyone interested in art. It emphasizes the elements of art/principles of design - drawing, painting, pottery. Students take those skills and their own creativity to become artists.

“Taking it to the next level - taking risks - is what it's all about in art,” said Mrs. Regan. “Who would think of making a dress out of matboard? Only an artist.”